23.05.2021  admin
Whenever a slot gaming manufacturer releases a game that becomes a surprise massive hit, there is a tendency to milk the theme to exhaustion, or the mechanics, hence the huge numbers of cloned games with varying themes in each manufacturers range. Of course, this isn’t always the case, sometimes a sequel is needed to keep up to date with graphics improvements and the like. Occasionally, these follow up games can even eclipse the originals in popularity although mostly, as with IGT’s Wolf Run and Coyote Moon slots, it is not the case. Lobstermania 2 is one of those rare exceptions where a slot game sequel crushes the original game in theme, style and gameplay, it may not be one of IGT’s oldest slots, but it is very definitely one of their best.
The key to Lobstermania’s popularity is that it is one of those games which manages to please nearly all slot players. It has a fun lively theme, with great animations and a particularly good example of how backing audio should work on a slot, so that’s entertainment ticked off. Then there is the game action, 40 Lines and an optional bonus bet, half a dozen bespoke bonus features in different types of formats and even two different wilds. Generally, when a slot game covers gameplay and theme well, it’s one of the big themed slots like Titanic by Bally and, as a result, it fails to deliver in the gambling side of things. This isn’t the case with Lobstermania 2, it’s medium variance with a high RTP, even the most committed slot gamblers like myself can find win potential to keep us satisfied – especially with 3 jackpots on offer.
Although the bonus game does have plenty going on, what makes Lobstermania 2 memorable for both land casino players and online slots players is the bonus rounds. There are three rounds based on three different global fishing locations, each with it’s own bespoke bonus. This is one of those slots where you will actually have to take a good look through the pay-table before play to assess what you want to pick and where to suit your playstyle. This level of interaction in slot games, where a player can influence what type of game they are playing, is growing and although this is an early example of player choices in effect, it’s a good one.
In terms of accessibility the game scores big again, you can play it as a land slot, an online slot and a mobile slot. It’s available both free to play for pure entertainment and as a cash slot too. Unusually, rather than leaning one way or the other as to how a slot should be played, I could easily recommend Lobstermania 2 for both purposes. In the online gaming landscape, that makes this a very rare slot, with very little else similar to it out there.

Although the bonus game does have plenty going on, what makes Lobstermania 2 memorable for both land casino players and online slots players is the bonus rounds. There are three rounds based on three different global fishing locations, each with it’s own bespoke bonus. Lucky Larry’s LobsterMania Mobile Application. LobsterMania slots is a 5-reel and 25 paylines game that remains quite a new online slot tournament. Players, when making their bets, can put maximum 75 coins per spin. Wsop free mega bonus spin. In addition, when making bets, millions of players tend to win the main jackpot, which can reach even 50,000 credits. Lobstermania can now be enjoyed at the best online casinos in Michigan, as well as at live casinos in Detroit and around the state. This is one of a long list of iconic IGT slots which have made it online. You can also enjoy Cleopatra slots and Wheel of Fortune.

Ready to go fishing for some big winnings? Lucky Larry’s Lobstermania 2 is a popular free slot game that features a fun nautical theme that will bring a touch of coastal flair to your mobile device. 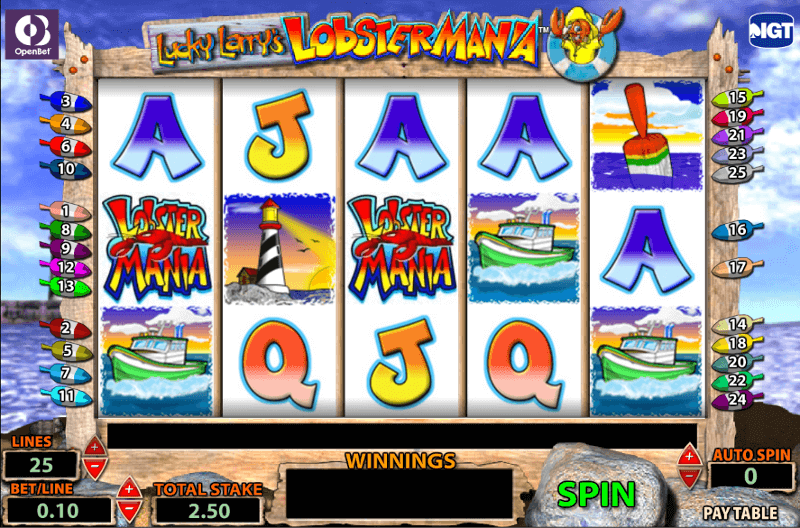 Lucky Larry’s Lobstermania 2 slot machine is designed and developed by IGT, a slot game company that’s known for its outstanding graphics and exciting gameplay. It’s the follow-up to the original Lobstermania slots machine, also a popular IGT offering and the predecessor to the Lobstermania 3 slot machine.

If you visit land-based casinos, you will likely recognize Lucky Larry and its crew of marine-inspired images, but the convenience of playing on at home just can’t be beat.

So, make yourself a snack—fish sticks or shrimp cocktail, and get ready to sail toward a salty adventure and the potential for riches.

Lucky Larry’s Lobstermania 2 features a sea-inspired theme that puts you in the vicinity of the New England coast. There are waves, crustaceans, buoys, speed boats, captain’s house, and lighthouses. Lucky Larry, the game’s charming mascot, enjoys rewarding lucky players with prizes of loot.

This online slot game boasts a wide array of vibrant hues—colors you might see in an episode of Spongebob Square Pants. Some players might associate the look of the interface with their favorite seafood restaurant’s dinner menu.

The marine creatures are crafted with cartoon-like appeal that gives the game is upbeat ambience. The symbols, even those that represent playing cards, are bright and bold.

There’s nothing understated about the look of Lobstermania online slots—and that might be why it attracts so many players fishing for rewards. If you prefer, you can mute the thematic music using the game’s mute controls.

IGT’s Lucky Larry’s Lobstermania 2 slot game features a fun ocean-going motif along with five reels and 40 paylines. Fans of the game have long revered it for its frequent rewards.

Lucky Larry’s Lobstermania 2 slots machine features a 94.14% RTP and allows players to bet in multiple denominations. While the game is essentially straightforward to appeal to a wide array of slot players, particularly traditionalists, it also has a few bonus features that ramp up the thrills.

There’s even an autoplay feature if you prefer to sit back and enjoy a plate full of crab legs.

The game features a light-hearted group of high-paying symbols as well as the lower-paying standard cards that range from nine to ace.

For extra luck, this slot game features two wilds. Both have the game logo. One has an orange background while the other has a blue / violet background.

Players will want to keep a look out for multipliers too. These can appear on a payline earning players either three times or five times their winnings.

When playing this online slot game, there are some exciting features to look forward to. The Buoy Bonus allows players to fish for lobster in any of three locations: Maine, Australia, or Brazil.

If you are lucky enough to win the Golden Lobster, you can earn an additional pick-me bonus. Depending on where you go fishing, you may land a pelican, kangaroo, or octopus. Each of these animals boasts its own exciting multipliers.

The other bonus feature is the Free Spins Bonus. After triggering bonus features, players can opt for free spins.

During this bonus feature, the wilds increase by 5 and the free spins bonus feature can be retriggered, which can amount to a treasure trove of winnings.

The jackpot is awarded at random by collecting three jackpot symbols which will then award you with one of the three jackpots located above the game. All progressive wins are multipled by your bet.

The Lobstermania online slot machine includes multipliers ranging from 3x your bet up to 5x your bet. Like the jackpot feature, the multiplier appears at random and can help boost those winning payline.

The multiplier symbols are only available on reel 3.

The bonus symbol, the white Lobstermania 2 slot machine symbol, can appear on reels 1, 2 and 3. You need to collect three bonus symbols to trigger the bonus picker round.

Once triggered, a new screen appears where you get the opportunity to choose which bonus feature you want to play. Choose either Lucky Larry’s Buoy Bonus 2 or Lucky Lobster’s Free Spins Bonus.

The picker bonus feature awards 40x to 95x the bet value when retriggered.

If you find a golden lobster during the Buoy Bonus round, you’ll be rewarded with another bonus feature–the Kangaroo, Pelican or Octopus bonus round.

Maine’s Pelican Bonus: In Maine, the golden lobster rewards you with the Pelican bonus round. Here, you will randomly select from the various pelicans. Each pelican has a prize valued at 160 up to 625 x your bet. Each pelican comes with the option to collect or continue selecting birds. Unlike the other two features, the prizes don’t accumulate. Instead, you need to decide whether the prize shown is worth keeping or choosing again in hopes of getting the 625x prize. You only have three picks, so choose wisely.

If during the “pick round” you choose the free spins bonus, you will receive 5 free spins in addition to the “rich” reels feature.

You can continue to trigger additional free spins by landing three bonus symbols on a winning payline up to a maximum of 240 spins.

Lobstermania 2 is a highly satisfying game with a penchant for frequent rewards. Its extra bonus features and multipliers make the game extra-fun, but the straightforward base game promises to keep conventional players happy.

The game’s nautical motif is delightfully rendered by IGT so its little wonder that this slot remains so popular among avid slot players. If you enjoyed playing Lucky Larry’s Lobstermania, the original, you’re bound to love this follow-up.